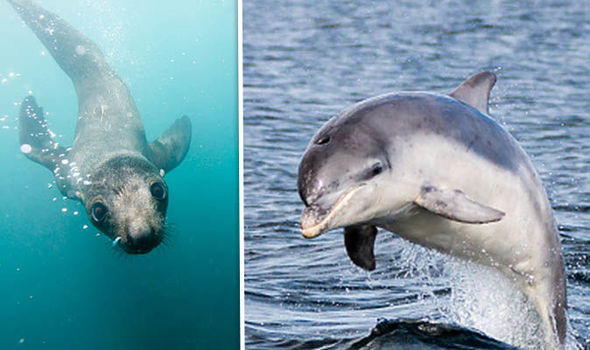 BREATHTAKING scenes of a seal working with dolphins to feast on fish have been captured by an ingenious underwater camera.

The mother fur seal filmed herself feasting on a giant “bait ball” of anchovies from a tiny lens fitted to her back by a wildlife television crew.

These remarkable scenes of the seal powering through the swirling mass of small fish corralled by a school of dolphins have given scientists a unique insight into the marine mammals they have been studying for more than 20 years.

In just two hours, Gordon Buchanan’s Animals with Camera team not only came up with gripping scenes from the shark-infested waters off Australia’s Kanowna Island, their footage has explained some of the holy grail mysteries of how fur seals survive in such a harsh marine environment.

By fitting a tiny waterproof camera to one of the island colony’s 15,000 seals, scientists have discovered how they evade the attentions of marauding great white sharks as well as the way they eat a wide array of prey and even team up with dolphins for spectacular feasts.

Professor John Arnould from Melbourne’s Deakin University was left awestruck as the camera relayed crystal clear shots of the mother’s seal hunting forays back to shore.

Footage first shows how she clambers from the nursery colony over rocks into the sea and then takes a seaweed manicure to remove parasites off her luxuriant fur.

Then, she gets down to the business of hunting, ever alert to the huge great white sharks that patrol the waters on the look out for their favourite food – fur seals.

The mother seal is filmed hugging the sea bed as this prevents her being attacked from below, one of the favourite ambush techniques of great whites.

Although the seal has to surface to breath every eight minutes, she performs a series of barrel rolls so she can spot any sinister shark in the vicinity.

While her own hunting strategy sees her capturing a cuttle fish and octopus, it the sight of a dolphin pod creating the anchovy bait ball that leaves Professor Arnould almost nonplussed.

He says: “I’ve learnt so much from the camera footage that it’s hard to know where to start.

“We’ve discovered they eat a lot more of some prey types than we previously thought and some prey we didn’t know they consumed.

“And we’re beginning to understand just how much time and effort these animals devote to vigilance and predator avoidance.”