When diving among the coral reefs, you can often see a very beautiful fish, which has an equally beautiful name – lionfish. This is a very interesting creature, which needs to be discussed in more detail.

Lionfish, also known as zebrafish, firefish or butterfly-cod (Latin name – Pterois) is one of the most beautiful sea creatures. They are characterized by large pectoral fins and long rays on the back – this gives a characteristic and well-recognizable appearance for all subspecies, which may differ in color. In length, these fish rarely exceed 30 cm, although individuals up to 55 cm in length are found. Lionfish are common in the tropical parts of Indian and Pacific oceans off the coast of China, Japan, and Australia. In recent years, their appearance in the Mediterranean Sea off the coast of Turkey, Lebanon, Israel, Cyprus has been recorded. This fish lives mainly among coral reefs.

In the daytime, lionfish are usually inactive and hide among stones and corals. This fish goes hunting only at night and preys on small fish and crustaceans. Lionfish is very similar to the bright bush with which coral reefs abound. For this reason, the victim often does not even notice the approach of a predator. At the same time, lionfish have practically no enemies, and they are not afraid of humans. The fact is that such beautiful rays have very poisonous spikes at the ends.

This fish is considered a real delicacy, in some areas it is even called tastyfish. The poison in its fins is dangerous only with direct contact under water, when processed with high temperature it loses its strength and becomes completely harmless. Also, lionfish are caught for keeping in aquariums, because this fish is very beautiful. 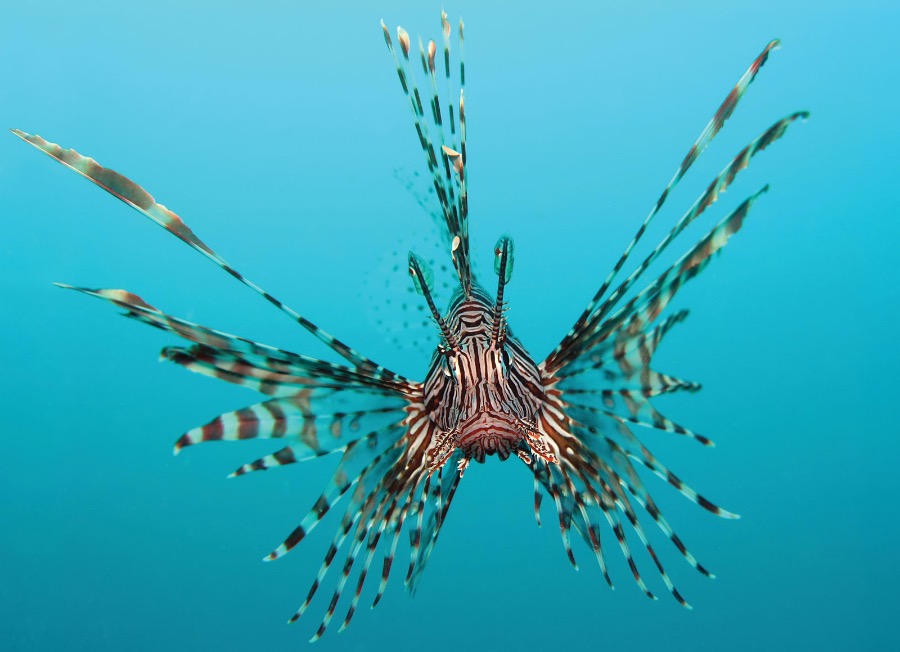 Inexperienced divers may be interested in such a beautiful fish, which is not very afraid of them. They may want to swim closer and even touch the animal. But this should not be done in any case! Remember that a coral reef is a place literally filled with all kinds of dangers and the local inhabitants are not very friendly. Even a small amount of lionfish poison can cause severe pain, subsequent pain shock and even loss of consciousness. A large dose of poison can become fatal.

Fortunately, most often these cases do not pose a risk to the diver’s life, but timely first aid is still needed, which will alleviate the suffering. After all, pain and swelling can remain for several days or even weeks. In addition, there is always a risk of wound infection. In case you touch the lionfish, you urgently need to rinse the wound, remove all dirt particles from it, if necessary. Then the damaged area is immersed for 30-90 minutes in hot water, with a temperature of up to 45°C – this will destroy the toxins that have penetrated into the blood. Then the damaged area must be treated with an antiseptic. Take a painkiller, if necessary, and seek professional medical help (if possible, then you had to start right from this step). 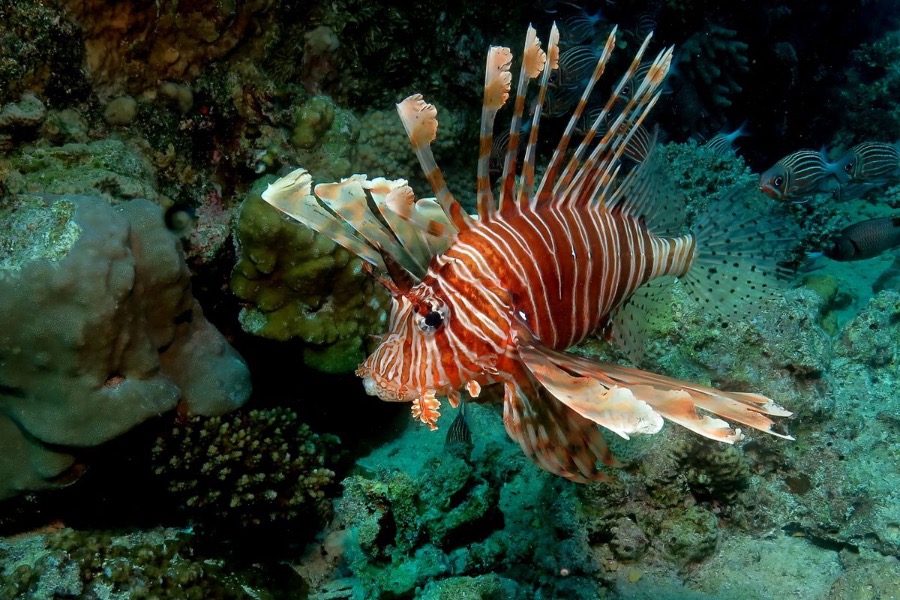 It is noted that lionfish have recently begun to represent a real disaster for various ecological niches. These fish feed on virtually everything, with no enemies at all and, due to their tremendous adaptability, have even received the nickname “Darwin’s nightmare”. They rapidly increase in number, reproducing year-round. Once in waters where they do not have worthy rivals, they quickly destroy some species and crowd out others, disrupting the ecological balance.

Previously, this was not a problem. But now, due to human activities, lionfish often end up in places where they have never been found before. An example is the Bahamas, where in 1992 Hurricane Andrew smashed an aquarium tank in Florida and few lionfish got into the Atlantic Ocean. In these water they don’t have any natural enemies. As a result, in the past years, they’ve spread up throughout the Caribbean and the Eastern seaboard. Today it is a real environmental disaster, and the Bahamas suffered the most. In addition, the ecology of these places today is already in a deplorable state, the appearance of another negative factor leads to disastrous consequences. The problem is compounded by the fact that catching lionfish, which are constantly among corals, is not easy.

To solve this problem, local spear-fisherman started to target manly this fish, that’s a good example of how sustainable spearfishing is. Proper selective spearfishing can help rectify human mistakes. In addition, a group of enthusiastic scientists even developed a special underwater drone. A fully automated device will independently find lionfish since it’s easy to do this, thanks to the recognizable appearance of the fish. It is planned to catch lionfish using special electrodes. Caught fish will be placed in a special container and then delivered to restaurants. Two prototypes with video cameras for remote control are currently being built. If successful, fully autonomous models will be built.