Whale shark greets jetski tour in the Bay of Islands

A rare and dramatic sighting of a whale shark has taken place off the coast of the Bay of Islands in Northland.

Whale sharks are slow-moving, filter-feeding fish and are the largest known fish species still living – some have reached nearly 13 metres long and weighed about 21.5 tonnes.

The giant fish was seen by Tango Jet Ski Tours while leading a group to the Hole In the Rock about 4:30pm on Tuesday. 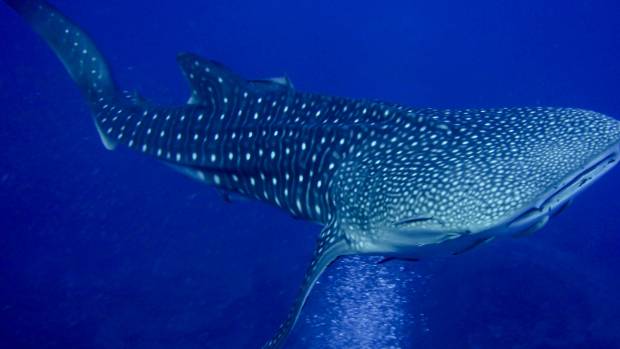 Despite its hulking appearance, the whale shark has only tiny, almost useless teeth and is sometimes so docile that entire boatloads of people can swim alongside the enigmatic, spotted beast. It’s also one of the least understood animals in the oceans.

“My skipper was trying to find some calmer water to get to the hole in the rock when she saw this giant thing moving towards the jetskis,” said Tango Jet Ski Tours owner operator Joff Bakx​.

READ MORE:
* Cracking the mysteries of the elusive, majestic whale shark
* Shark facts: When to get out of the sea and why spearfishing can land you in hot water
* How to react when a great white shark jumps into your boat
* Five myths and misunderstandings about sharks

“We’ve definitely seen some pretty crazy things this summer, rays and sharks, but the whale shark is top of the list for sure.” 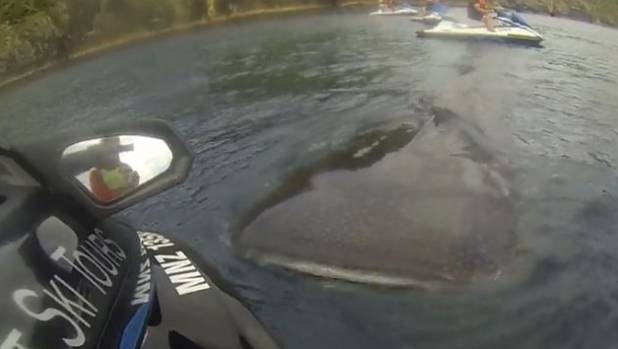 “It cruised around and lifted its head out of the water … at one stage it kissed one of the jetskis.”

Bakx said the whale shark was between six and eight metres long, and cruised the waters for about 20 minutes.

“The jetskis are about three metres long and it was two, to two and half times longer than that,” he said.

“It cruised around and lifted its head out of the water … at one stage it kissed one of the jetskis.”

Bakx said the cyclones had brought warmer waters which have brought interesting fish to the region.

“We’ll have our third cyclone this weekend so we’ve seen some crazy things, a crazy amount of bait fish – it’s been