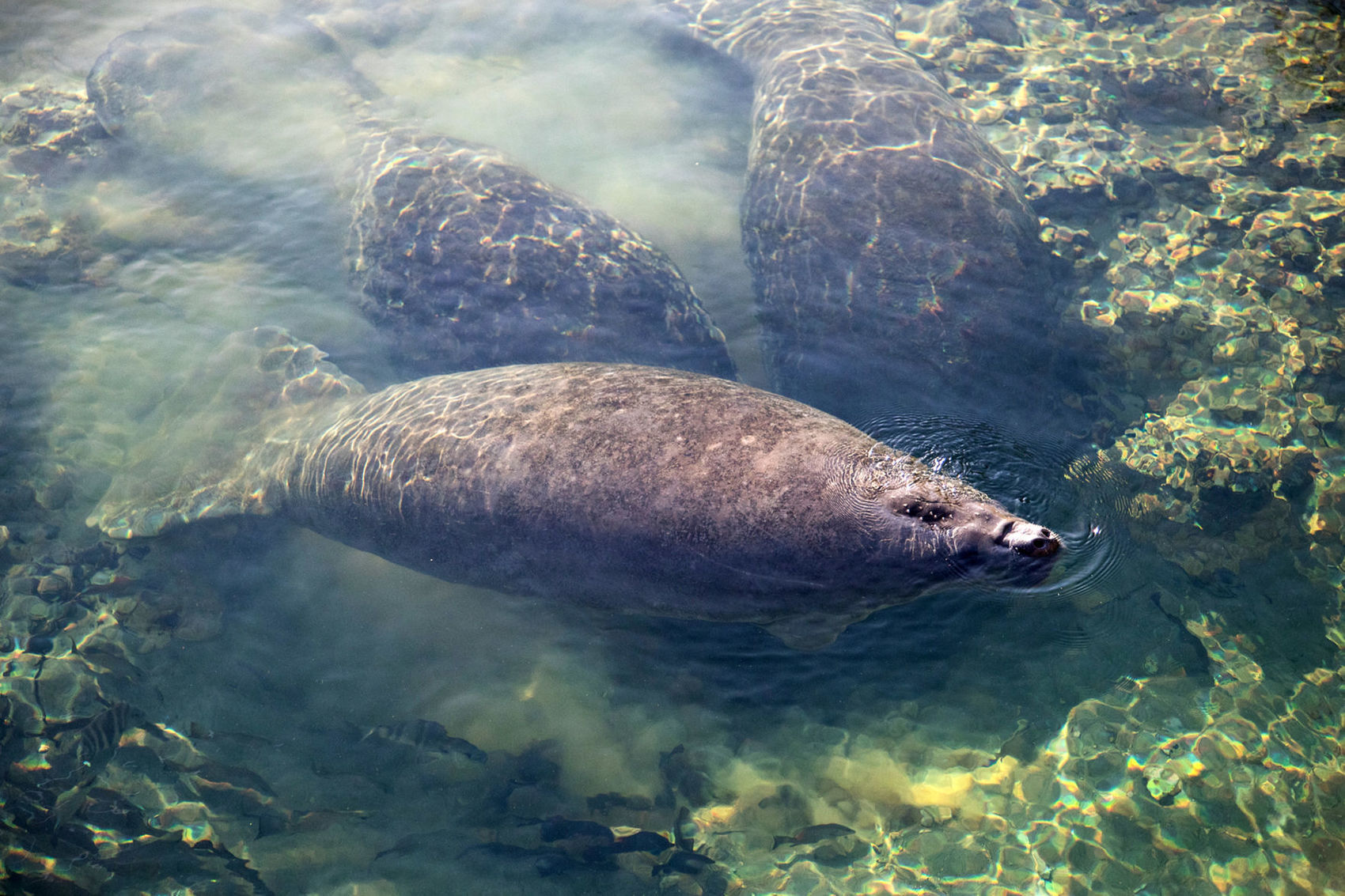 I’m continuing with my exploration of the wonders of Florida by taking a closer look at the Florida manatee.

Also known as the West Indian manatee (Trichechus manatus latirostris) or the sea cow, the manatee was one of the original 78 species included on the endangered species list when the Endangered Species Preservation Act was passed into law in 1966.

Manatees appear in the fossil record around 50-60 million years ago. This is older than most of our modern bird species by many millions of years. So these animals have been around for a very long time. There are many fossilized remains found in Native American rubbish piles pre-dating the arrival of early Spaniards.

The Florida manatee is one of two subspecies of the West Indian manatee. The other subspecies is the Antillean manatee, which occurs from Brazil to Mexico.

The Florida manatee is found along the Atlantic coast from the Carolinas, Georgia and Florida and also in the Gulf of Mexico, from Florida to Texas. However the main concentration is found in and around Florida.

Manatees are large marine mammals, with adults weighting on average 1,000 pounds, with some as much as 1,500 pounds. They have an average length of 12 to 14 feet. Like elephants, they continue to grow throughout their lives. The largest manatee ever recorded was 13 feet, 4 inches long, weighing over 3,200 pounds. When you first see one of these animals up close, you realize how massive they are.

These large aquatic mammals are gray and sparsely covered with hair. They have large forelimbs, which are better described as flippers, and have no hind limbs. They do have a large wide tail used for swimming, and when you see them swimming, they look like they are in extreme slow motion.

They have tiny eyes, but can see very well. And although they don’t have any external ear openings, they hear very well. They have flat valves that cover their nostrils when underwater. Being air-breathing animals, manatees need to surface every three to five minutes to breath, but they can remain submerged up to 15 minutes if necessary.

They are gentle giants, spending most of their day sleeping and feeding on aquatic plants. They consume about 150 pounds of vegetation each day. They use their eyesight to find the food.

Female manatees become sexually mature at four to five years of age. Mothers give birth to a single calf once every two to five years. Only rarely do they have twins.

Calves weigh about 75 to 90 pounds upon birth and are over 6 feet long. Since these are marine mammals, the calves suckle milk from their mothers for the first five to six months and start eating aquatic vegetation at three to five months.

Most calves stay with their mothers for up to two years before moving out on their own. During this time, the calves learn what kinds of plants are good to eat, where the warm water refuges are located, and the migratory route from their mothers.

Today there are about 6,300 manatees in Florida. This is up from a low of about 1,200 25 years ago. They are still on the endangered species list, but due to improved protection and reduction in direct threats to their habitat, they are now recommended to be moved to the threatened species list.

I’m always drawn to writing stories about endangered species. I have always felt that education is the key to helping save wildlife from extinction. I have dedicated my entire career, over 30 years, to environmental education, hoping that as our society becomes educated about wildlife, we can make better decisions to save our planet and all the wildlife it holds.

It warms my heart to see such a magnificent animal doing much better than the first time I saw a manatee back in the 1970s.

If you are ever in Florida it would be well worth your time and effort to see these magnificence marine mammals.