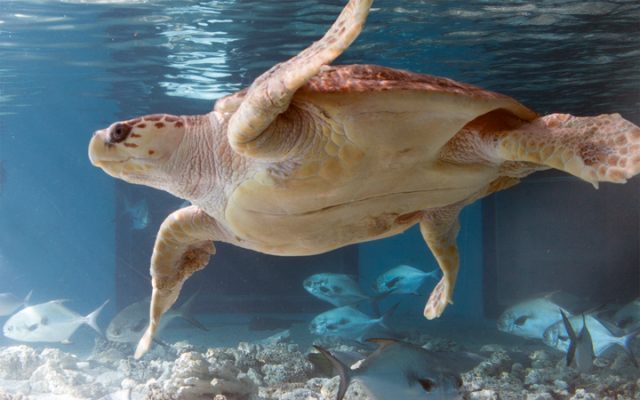 With two sea turtles killed in Long Island Sound by propellers in the last month, The Maritime Aquarium at Norwalk is asking boaters to slow down and be aware of these endangered animals.

A dead juvenile sea turtle — believed to be a loggerhead — was found Aug. 9 near Norwalk’s Sheffield Island by staff of the Norwalk Seaport Association. The turtle had three obvious propeller gouges up its approximately 20-inch-long shell.

“Summer is the time of year that sea turtles visit Long Island Sound,” said Dr. David Hudson, research scientist for The Maritime Aquarium. “It’s also the height of boating season in the Sound, but that doesn’t have to mean a deadly overlap for the turtles – if boaters would just practice caution.”

Four species of sea turtles may visit the Sound in the summer: loggerhead and green, which are both listed as Threatened; and Kemp’s ridley (the smallest sea turtle) and leatherback (the largest), both Endangered.

Sea turtles are most vulnerable to boat collisions when they come to the surface to breathe and/or warm themselves in the sun. (They are cold-blooded.) At the surface, Hudson said, the turtles are least able to make avoidance maneuvers.

Hudson recommended that boaters reduce their speeds, especially in comparatively shallower waters and anywhere near sea grasses, where some turtles feed. He discouraged the use of autopilot, and encouraged assigning a passenger to serve as a spotter.