Everyone is aware of marine animals like dolphins, sharks, whales or walruses. But many other, less well-known species, inhabit the seas. For example, one of the most unusual and hard to meet members of the marine world — dugong.

Dugong (Latin «Dugong dugon») is a large marine mammal with a cylindrical shape body length up to 4 meters, and pale skin. The color of its skin can change with the age of the animal. The weight of adult animals can be 500-600 kg or even more in some cases. Usually, dugongs inhabit coastal waters, shallow bays, and lagoons on the depth 20-30 meters. Sometimes it goes to the open sea.

Biologically, dugongs belong to the order of Sirenia, which in addition to them also includes three species of manatees. In the distant past, the Dugongidae family included several species of animals, but due to human activity and other factors, today dugongs are its only representatives. Steller’s sea cow, the last “relative” of the dugongs, disappeared as a species in the 18th century. 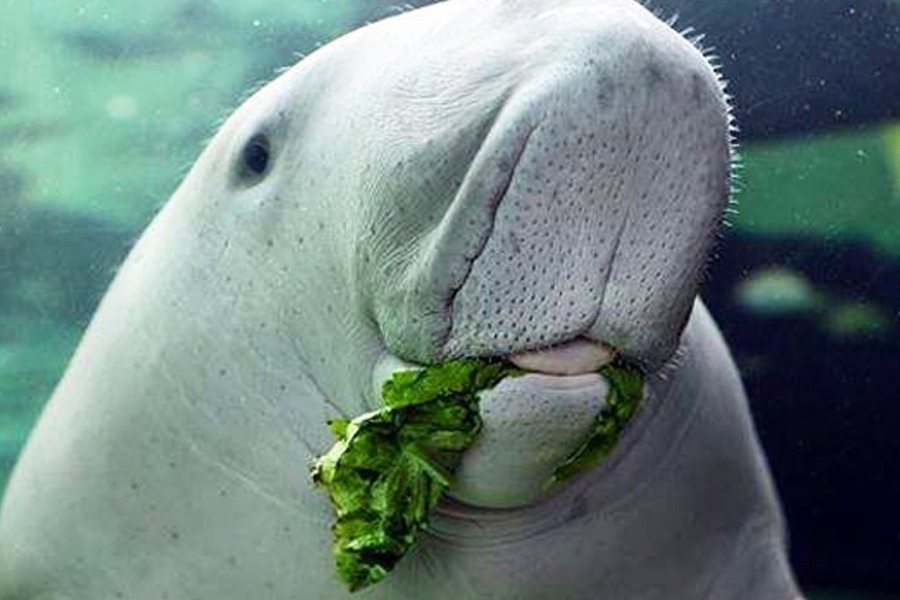 Typical food of dugongs is seagrass, it’s the only herbivorous marine mammal. According to some data, the animal can also eat small marine creatures, like crabs and shrimp. But, in any case, the seagrass is the main food for them. In one day one dugong can eat up to 40 kg of seagrass. While eating the animal can stay under the water for 10-15 minutes, then it has to surface to breathe — true freedivers of the marine kingdom!

The word «dugong» came from Visayan — a group of languages of the Philippines. The first description of the animal was written down by French naturalist Georges-Louis Leclerc, Comte de Buffon in 1765. In those days, the habitat of dugongs was much wider than today. Now, these amazing animals are endangered, the dugong population is thought to be shrinking. They are no longer found in the coastal waters of many countries. In some other places, the size of the population does not exceed more than 50 animals. The main cause of extinction is human activity.

Dugong conservation in the UAE

No one knows the exact number of dugongs in the world, but we believe that there are around 100 000 animals. Most dugongs live off the coast of Australia (according to scientists calculations, it is 90% of the whole population). Part of them inhabit the waters of the Gulf and the Red Sea — about 7300 animals. And around 3000 dugongs live near the coasts of the UAE. Most of them you can find in Abu Dhabi.

All those numbers have become known due to the fact that since 1999 special research has been conducted in the UAE.  National scientists do regular observations of habitats and migrations of dugongs using the latest technology. The Dugong and Seagrass Conservation Project was started. This initiative is executed by the Mohamed bin Zayed Species Conservation Fund and is the first coordinated global effort to conserve dugongs and their world.

We need more information about the species and their ecology and biology. It takes long-term observation of the dugongs’ habitat. Also, the UAE takes part in the United Nations Environmental Programme — Convention on Migratory Species Dugong Conservation Memorandum of Understanding. Thanks to all these actions, the number of animals in the UAE remains stable.

Rapid coastal development in the UAE is a threat to dugongs. One of the main reasons for this is the reduction of the amount of seagrass needed to feed animals. And ecological studies of seagrass meadows in Abu Dhabi is one of the most important parts of the study.

Freediving UAE is proud to have the image of this amazing animal on its logo. When creating the logo, the fact that the UAE is one of the few countries in which you can meet with dugongs was taken into account. The life of these animals depends on people and we strive to do everything we can to raise the level of awareness and help the cause of preserving the population of these animals.

The largest number of animals is observed near Al Yasat Marine Protected Area and in the Marawah Marine Biosphere Reserve. There are the greatest seagrass beds in these places. The highest density of dugongs is observed near Bu Tinah Island. It’s a unique place, closed to visitors and fishing. Only a few selected people have access to it. This island is small, just two square kilometers. But the diversity of the wildlife that exists in this place is amazing. 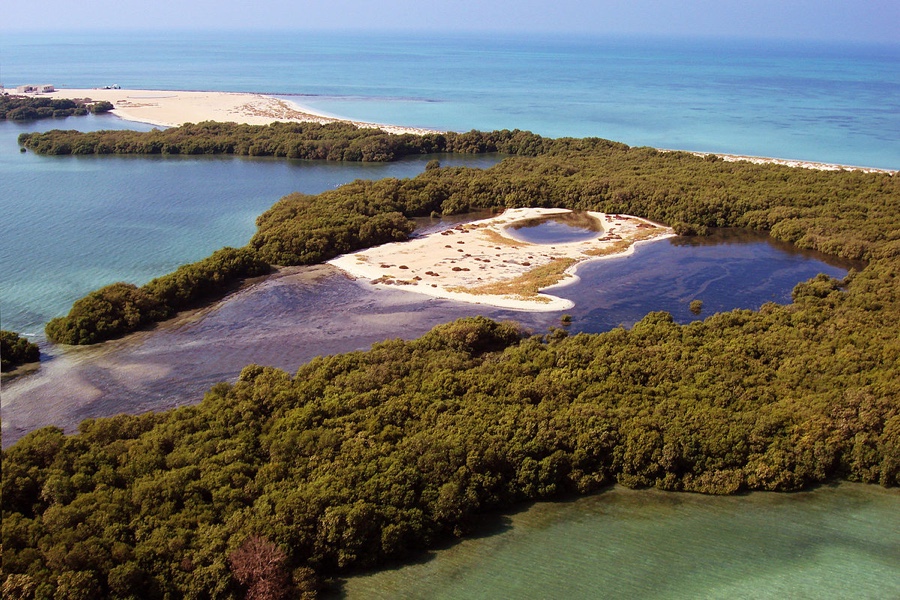 It’s hard to believe that this wonderful place is located not far from the world of huge skyscrapers. Tourists are not allowed to the island, special patrols strictly monitor this. It’s the world of dugongs and other wildlife. People are not welcomed here — the presence of tourists and fishers will quickly destroy the existing ecosystem. In 2011 Bu Tinah was one of the 28 official finalists of the «New7Wonders of Nature» initiative.

Thanks to such projects, the dugongs have hope for survival. And not only them.