Everyone who participated in our Friday dives could observe interesting sea animals, very similar to jellyfish. In fact, they are completely different creatures called salpae or salps.

Like the jellyfish, salps have a translucent body, through which muscles and internal organs are visible. But if you look closely, it becomes clear that they have a different body structure. And if the jellyfish looks like a mushroom, salps have a barrel-shaped body, the size of which can vary from a few millimeters to several dozens of centimeters. The largest animals have a length of 33 cm. But most often individuals from 1 to 10 cm long are met. It is hard to believe that these small creatures have a huge impact on the climate of the whole planet, affecting the carbon cycle of the ocean. The fact is that sinking fecal pellets and bodies of salps are an excellent absorber of carbon dioxide from the upper layers of the ocean and lower layers of the atmosphere. 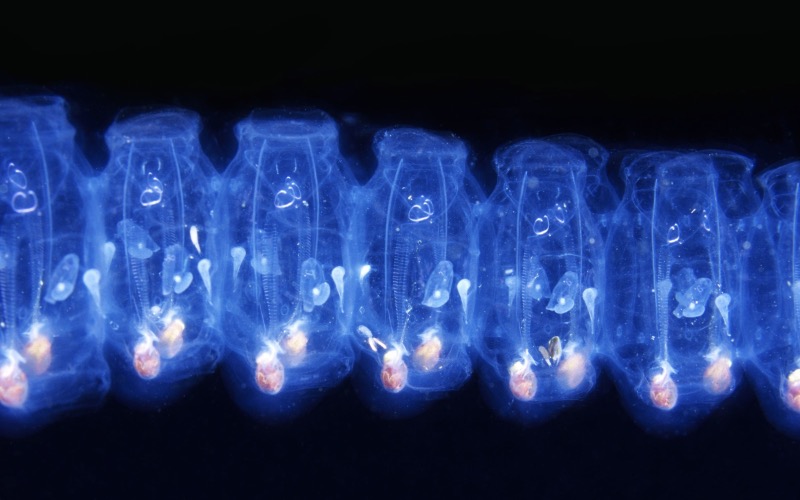 To move from place to place, the animal passes water through its body, creating a jet movement. This is one of the most effective examples of jet propulsion in the animal kingdom. Salps feed on phytoplankton, and they themselves serve as food for other kinds of fish and sea turtles.

Salps hold together, sometimes creating very large colonies in the form of long chains. The more food, the larger can be a colony. There are small colonies of few organisms and huge colonies, which include several hundred individuals. And since salps have the ability to glow, the colony can look very impressive in the twilight of the water depths!

The most unusual quality of the salps is that these creatures miraculously combine in themselves the features of lower and higher animals, becoming a kind of transitional step in evolution.

Unlike some jellyfish, salps are not dangerous to humans. But they can sting, sometimes quite sensitive. If you do not have allergies, then there is nothing to fear, although it can be unpleasant. However, the lightest wetsuit will provide you with reliable protection. But don’t try to grab the salps colonies moving past you. With your excessive curiosity, you can damage this amazing animal, cause their death.