In the underwater coral kingdom, we can see an unusual form of growth. It’s like a forest of pipes grew up on the ocean floor. What is it? We can take them for unusual corals, but they’re not. These are underwater animals – sea sponges. Their unusual structure surprises us, and the variety of shapes and colors delight us.

It was thought to be a plant until in 1825 a man named Robert Grant proved that sponges were once animals!

He looked at sponges in water through a microscope. And he saw streams of water that went through some holes and exited through others. But still, for years, scientists have not known what kind of animal it is. They thought they were tiny, single-celled creatures who lived together in one large colony.

We know that sponges are dried marine skeletons belonging to the class of «porous». This is a rather significant group of animals. And although sponges are one of the lowest forms in the animal world, their structure is quite complex. Sea sponges live on the sea floor. They don’t move. These underwater creatures of the sea are attached to solid surfaces and live in one place all the time.

Sea sponges thrive in a wide variety of climatic conditions, from tropical to polar, and can survive at all latitudes, from tidal zones to the deepest areas of the sea, including marine underwater caves with no light at all. However, the highest quality is noted for the sponges of the Mediterranean, the Aegean and the Red Sea.

They are able to regulate the amount of water that passes through their bodies by narrowing the holes. They actively filter the flow of water through their structures by continuously beating thousands of tiny flagella in their pores. 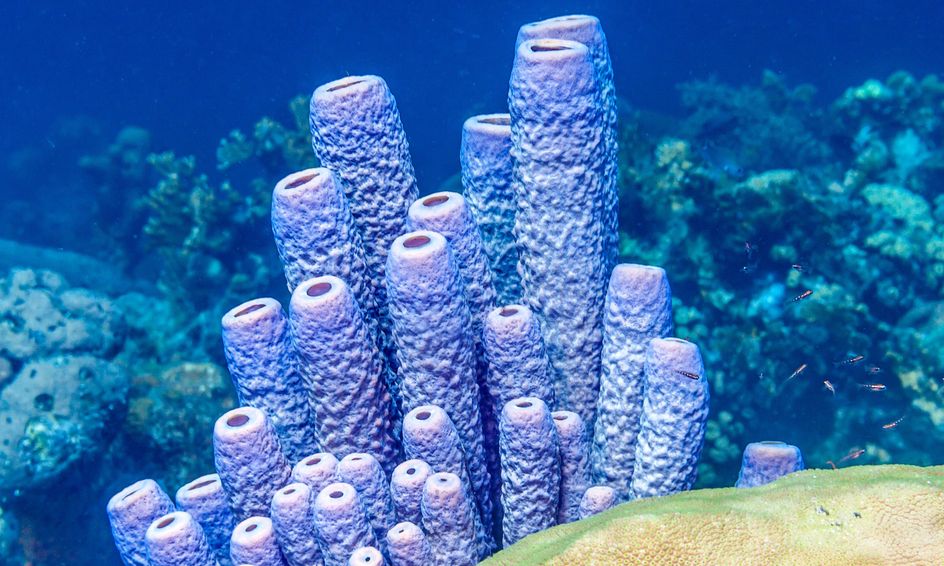 Sea sponges pump 200,000 times the volume of their bodies every day.

The main diet of sea sponge is organic particles and plankton. They filter the ocean to get food. The flowing water gives the sponges nutrients and oxygen. On average, they eat 2/3 of their own body mass. It’s amazing to know that some sea sponges are carnivorous animals. They eat crustaceans and small marine animals.

Sea sponge has a beautiful regeneration process. They can easily repair broken pieces and damaged parts of their bodies. They can grow back in the same place like mushrooms. They also have the ability to regenerate into new individual sponges even from the smallest fragments of the original.

Sponge divers collect the sponge from the sea and ensure that the sponge roots remain. This gives sea sponge a chance to regenerate. If you take the root, the sponge dies. Harvesting uses specially designed hooks or knives in order not to disrupt the natural processes of sponge reproduction.

If you think collecting sea sponges is bad, you’re wrong. Sea sponge may be as old as 150 if not collected from time to time. If sea sponge is not collected, they eventually lose the ability to regenerate. Studies have shown that in areas where sponges are actually constantly harvested, there is an increase in population density. The carved and re-emerging sponge will grow for several years to become larger and healthier than originally was.

Sea sponges have a wide range of uses: