HomeLatest NewsWhale sharks gather at a few specific locations around the world – now we know why
July 12, 2018

The whale shark is the largest fish in the world, but much of its lifecycle remains shrouded in mystery. These gentle giants gather in just a handful of places around the globe – something which has long baffled scientists – but our new research has started to explain why. Better understanding of whale shark movements could help prevent further population loss in a species that has already experienced a 63% population decline over the past 75 years. 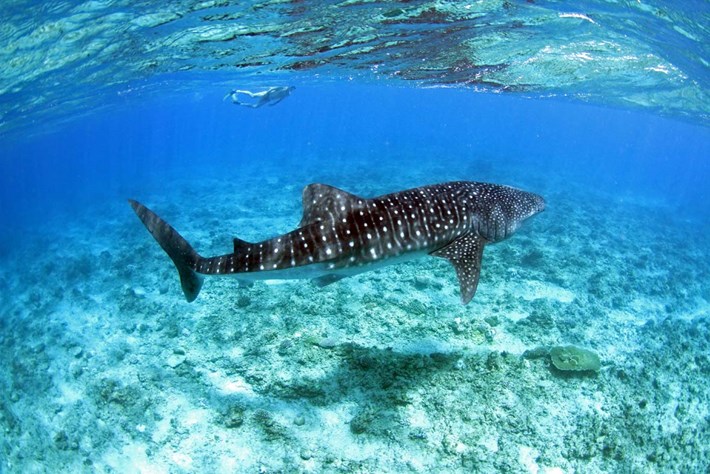 When swimming solo, the whale shark, which can grow up to 18.8 metres in length and 34 tons in weight, travels all over the world. Recently, a group of scientists tracked the remarkable journey of one whale shark across the Pacific from Panama to the Philippines. At more than 12,000 miles it proved to be one of the longest migrations ever recorded.

Our new global study shows that whale sharks congregate in specific areas of shallow water, next to steep slopes that quickly give way to areas of much deeper water (usually between 200 metres and 1,000 metres).

We identified three main reasons. First, the deep water is used by whale sharks for feeding. Studies have shown the sharks diving to depths of almost 2 kilometres (1,928 metres to be precise) to feed on zooplankton and squid. 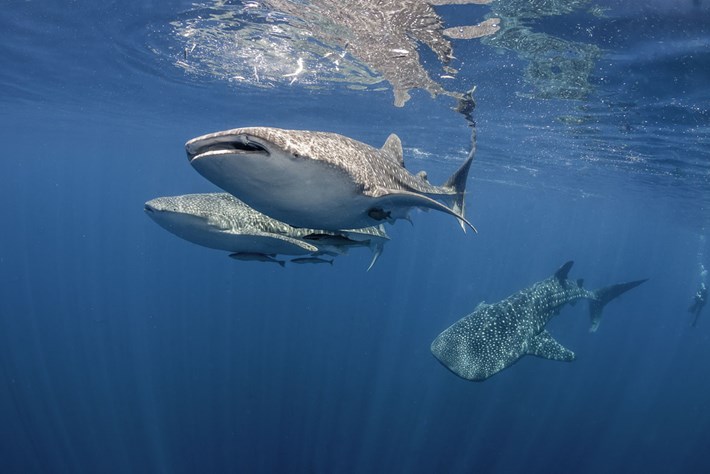 A group of whale sharks feeding near Indonesia. Shutterstock

Second, the steep slopes are known to bring nutrients up to the surface from the deep, which in turn increases the abundance of plankton and attracts large numbers of filter-feeding species. And finally, in shallow water, as well as feeding on coral and fish spawn, the sharks are able to thermoregulate, warming themselves back up after their dives into deep water which gets as cold as 4℃ (39°F). 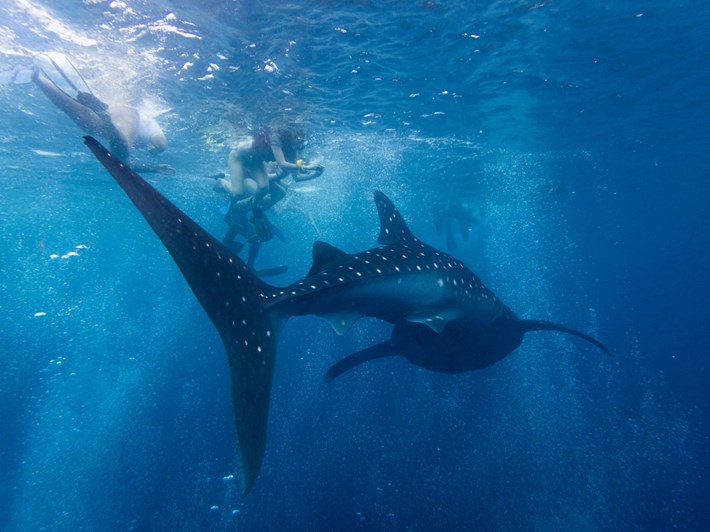 These discoveries have narrowed down some of the key reasons why whale sharks congregate where they do, but many mysteries remain. Do individuals travel between these hotspots? Coastal gatherings are predominately made up of immature male sharks, usually still just four or five metres long. So where are all the girls? And where do whale sharks mate and give birth? Mating and pupping have never been seen in the wild – but, intriguingly, up to 90% of the whale sharks passing through the Galapagos marine reserve are female and thought to be pregnant.

This article was originally published on The Conversation. Read the original article.