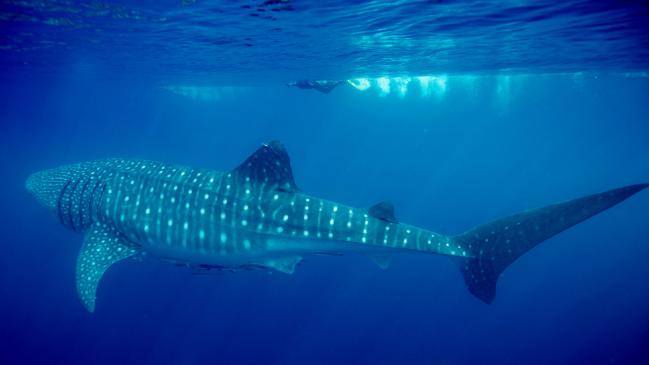 The travels of whale sharks Tiffany and Doug are causing a stir. As a marine species typically found in tropical waters off Western Australia’s coast, the pair inexplicably have headed south and showed up off the coast of Perth.

Tiffany is an 8m whale shark named after the female pilot who regularly flies scientists over the giants’ favourite haunts near Ningaloo Reef, 1250km north of Perth. Doug is named after a member of the CSIRO Oceans and Atmosphere team conducting a five-year, $5.4 million study of the reef ecology.

The puzzling arrival of Tiffany and Doug so far south is posing questions for scientist Richard ­Pillans and his team, which ­attached small transmitter tags to the mottled flanks of 10 whale sharks last year. “Given there are two of our 10 tagged whale sharks in exactly the same place at the same time, it’s very likely there are a lot more sharks out there as well,” he says. “There’s obviously something going on out there.”

As the largest living non-­mammalian vertebrate on earth, the whale sharks’ daunting size and gentle habits attract thousands of visitors to the World Heritage-listed Ningaloo Reef each year. Tourists swim alongside the whale sharks in clear Indian Ocean waters.

Perth residents eager to swim alongside Tiffany and Doug would have a hard time even finding them, says Dr Pillans. “Both sharks are in really deep water of 2000m to 3000m on the edge of the continental shelf. That’s really unusual for whale sharks, because more often they stay within 200m of the shoreline.

“Presumably there’s an up­welling of cold, nutrient-rich water that’s being forced up, creating a mass food opportunity like krill, one of their favourite foods.”

Adult females are rarely seen at Ningaloo Reef. “Whale sharks give birth to live young which are less than a metre long, and we know very little about where this occurs,” Dr Pillans said.

The Ningaloo Outlook project, a partnership between CSIRO and BHP, hopes to shed light on such aspects, and on the reef’s complex ecosystem.

“One of the aims is to look at the impact of ocean warming on the distribution of whale sharks on the WA coast, but we haven’t got a good handle on that yet,” said Dr Pillans. “None of the previous tagged sharks have come this far south.”

That Tiffany and Doug were found 130km off Perth’s coastline may be unusual, but another tagged whale shark, Roger, made a longer journey, from Ningaloo to Queensland’s Gulf of Carpentaria, about 3500km away.

Last year a tagged animal made it to Christmas Island, 1500km northwest of Ningaloo.

“One of the hard things with whale sharks is to keep the tags on them for long enough to get meaningful data,” said Dr Pillans. “Nine to 12 months is basically what we’re aiming for in order to track them as they move away from Ningaloo.”

Whether Tiffany and Doug’s travels are motivated by food or sexual frolic is unknown.