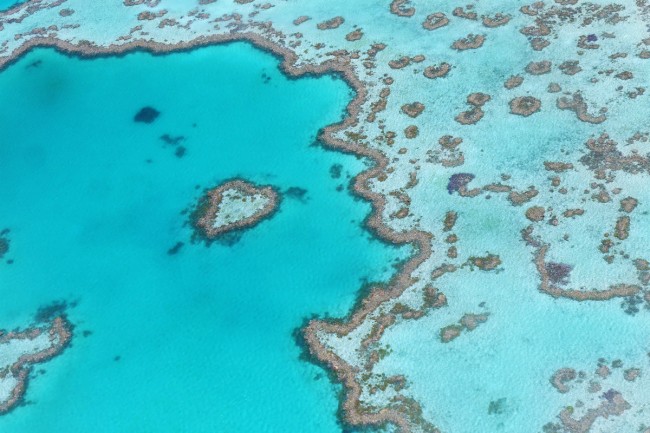 he Great Barrier Reef is Australia’s natural treasure, one of the seven natural wonders of the world, and the largest living structure on the planet.

Sprawling at 344,000 square kilometers, the ecosystem is composed of 3,000 individual reef system and houses a variety of marine plants and animals including 4,000 species of mollusks, 1,500 species of fish, 400 species of sponge, and 300 species of hard corals.

Endangered species such as the dugong (sea cow) and the large green turtle call the Reef their home. To humans, the site provides billions of dollars in revenue from commercial fishing and tourism.

In 1981, UNESCO declared the Great Barrier Reef as a world heritage area. However, its crystal blue waters and bustling wildlife are being threatened by several environmental issues.

In the past three decades, the World Wildlife Fund or WWF reports that the Reef has lost half of its coral cover while pollution has caused an outbreak of deadly starfish. Global warming is also killing the Reef, causing massive coral bleaching that can potentially wipe out life underwater.

Every year, the governments of Australia and Queensland allocate approximately AU$200 million to care for the marine ecosystem and address issues that threaten its wildlife. On its website, the Australian government has detailed steps it has taken to protect the Reef by allocating funds and efforts to address individual threats to the heritage site.

The government has even doubled the funding to control the population of crown-of-thorns starfish that preys upon coral polyps. The Great Barrier Reef Marine Authority said that the venomous predators had caused the decline of almost half of the coral cover between 1985 to 2012.

The Department of Environment and Energy has also reported that since 2014, the government has banned port-related capital dredge within the protected natural heritage area.

“While [the reef] is facing increasing threats, we intend to remain leaders in reef management,” said Turnbull.

However, a more pressing problem threatening the Great Barrier Reef and its inhabitants is climate change. The rising temperatures around the world due to higher concentrations of greenhouse gases in the atmosphere are causing massive coral bleaching.

“We’ve seen half of the corals on the Great Barrier Reef killed by climate change in just two years,” stated Mark Eakin, who authored a recent study on the largest reef system. “This study shows that the coral reefs that have been least affected by heat stress in the past are more sensitive to heat stress than we realized. It also shows climate change threatens the diversity that is the hallmark of coral reefs.”

To address the threat of climate change to the Great Barrier Reef, the Australian government is in the process of meeting its 2020 emission reduction target by investing in new technology, investing in soil carbon, cleaning up power stations, revegetation, increasing energy efficiency, and more. The country has also pledged $200 million to the Green Climate Fund in the hopes of creating a new climate change agreement that will involve countries around the world.

However, controlling climate change should be a global effort. Eakin, a coordinator for the Coral Reef Watch, added that unless humans are able to control the increasing temperature in the ocean, the Great Barrier Reef and the coral reefs around the world could be destroyed.