Without air tanks, freedivers train to overcome ‘urge to breathe’ 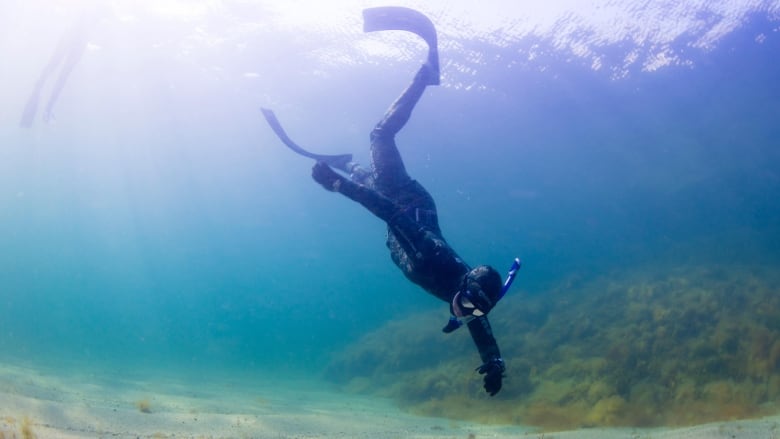 The Halifax Freediving Club was formed just a few months ago but already there’s a core group of regular divers. (Submitted by Nicolas Winkler)

A group of divers wades into the clear ocean of Bear Cove, on the approaches to Halifax harbour.

They wear wetsuits and carry fins, weights and masks. They plan on diving to the seaweed-covered rocks 15 metres below.

It’s a popular dive site, but one thing appears to be missing: these divers have no tanks of air strapped to their backs. They are freedivers.

The only air they bring with them is what they can pack into their lungs using special breathing techniques. When they duck-dive below the swell, they are holding their breath. Gone for one, two, three minutes before resurfacing. This is a short dive.

“On a static breath hold, I can do five minutes,” says Nicolas Winkler, a freediving instructor and member of the new Halifax Freediving Club. 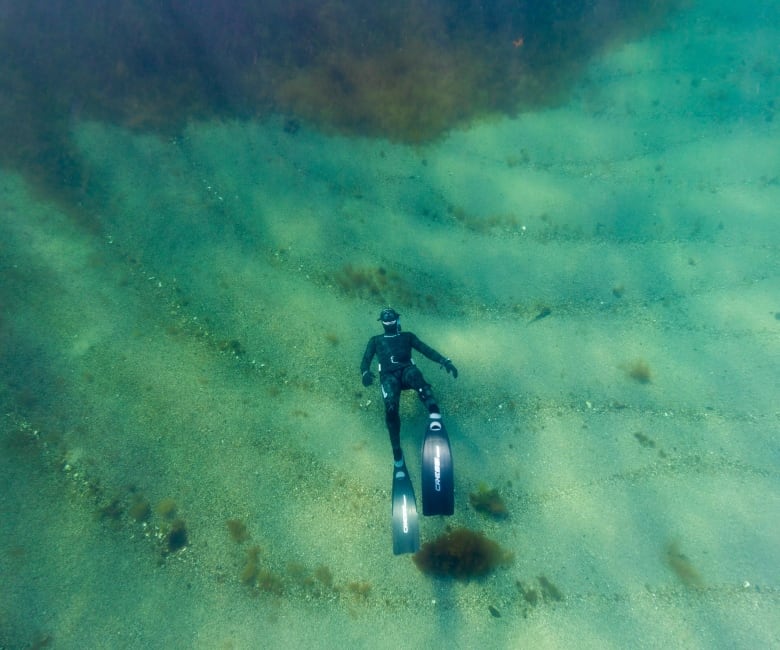 The freedivers plunge into the water without air tanks and hold their breath for as long as they can.(Submitted by Nicolas Winkler)

Freediving has been around for thousands of years. People living in oceanside communities all over the world learned to dive to remarkable depths to find pearls and sponges and to salvage goods from wrecks. But today’s freedivers go far deeper, and for much longer.

The organized sport is new to Nova Scotia. The Halifax Freediving Club was formed just a few months ago but already there’s a core group of regular divers, thanks in part to the training courses organized by Winkler. The key to all is to learn breath control.

“To pass the course, you have to do a minute and a half, but we could easily get you two and a half minutes,” he says.

There are four divers in the ocean this evening. One of them is Annie MacKintosh. Originally from Alberta, she now lives in Halifax and she is most at home in the ocean.

MacKintosh loves the simplicity of freediving, but she has a competitive side. And in a sport where records can be set, it’s good to be there at the beginning, when the field is less crowded.

“There are no provincial records in Nova Scotia set by women, so pretty much every time I go dive I set a new record,” she says. 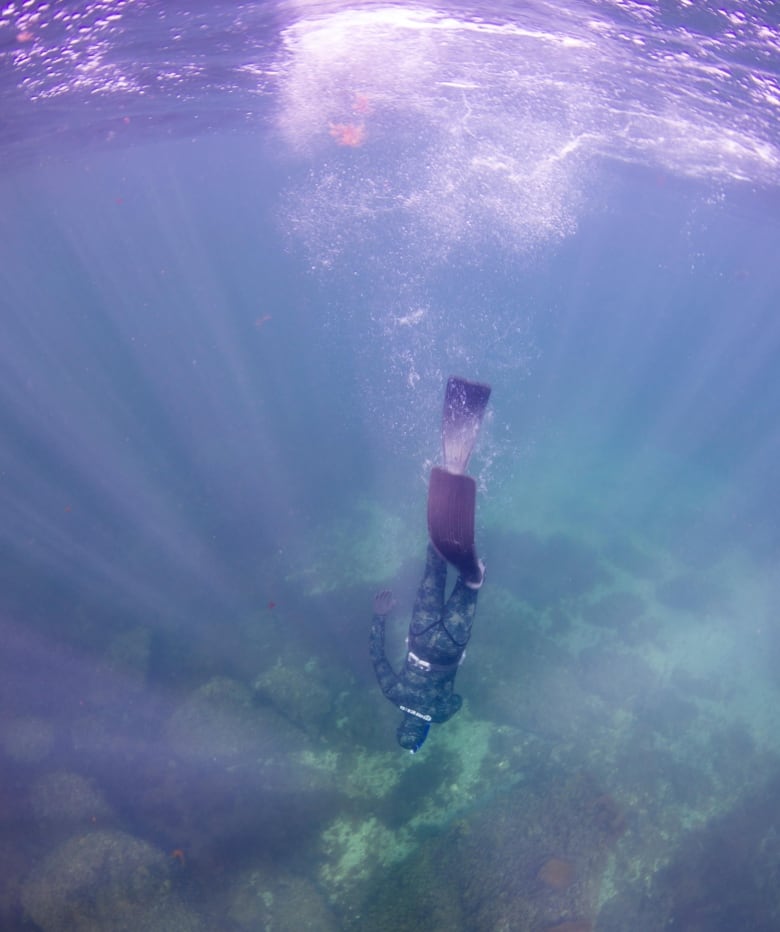 The record for the deepest freedive is 253 metres. (Submitted by Nicolas Winkler)

Some of those records are remarkable. They are also complicated, for people not involved in the sport. There are different disciplines dealing with depth, how people get to that depth — whether swimming or using weights — and breath-holding records for just sitting underwater, or while swimming, or after saturating your lungs with pure oxygen.

The deepest depth reached is 253 metres. The record for staying underwater on a single breath is just shy of 12 minutes, and after breathing oxygen before heading underwater, one man stayed there for more than 24 minutes.

The Halifax freedivers are a long way from those records, but that’s not what sends them underwater.

The record for staying underwater on a single breath is just shy of 12 minutes. (Submitted by Nicolas Winkler)

While there have been individual freedivers in the province for years, the creation of the Halifax club shows the growing interest in the sport.

Gear designed specifically for freedivers, from extra-long fins to special masks, is now being sold in dive stores that used to focus entirely on scuba gear. And formal training courses are encouraging people to try a sport that can seem intimidating.

“The human body’s pretty incredible,” says Cloutier. “There’s the mammalian reflex, which is what allows everybody to hold their breath a lot longer than they think they can.”

That reflex, a holdover from our evolutionary past, is more obviously developed in aquatic mammals like dolphins and seals.

The reflex is triggered when our faces are submerged in water, slowing the heart rate and sending more blood to our lungs to stop them collapsing under pressure. Relearning how to use that ancient instinct is what allows freedivers to stay underwater for so long.

“Understanding that helps one get over the mental barriers,” says Winkler. “There are mental techniques that one can learn to focus the mind, to distract ourselves from contractions of the chest that gives us the urge to breathe.”

Freedivers say that urge is worth overcoming, to enjoy the silence of the ocean and the freedom to explore without bulky equipment — for as long as a breath lasts.