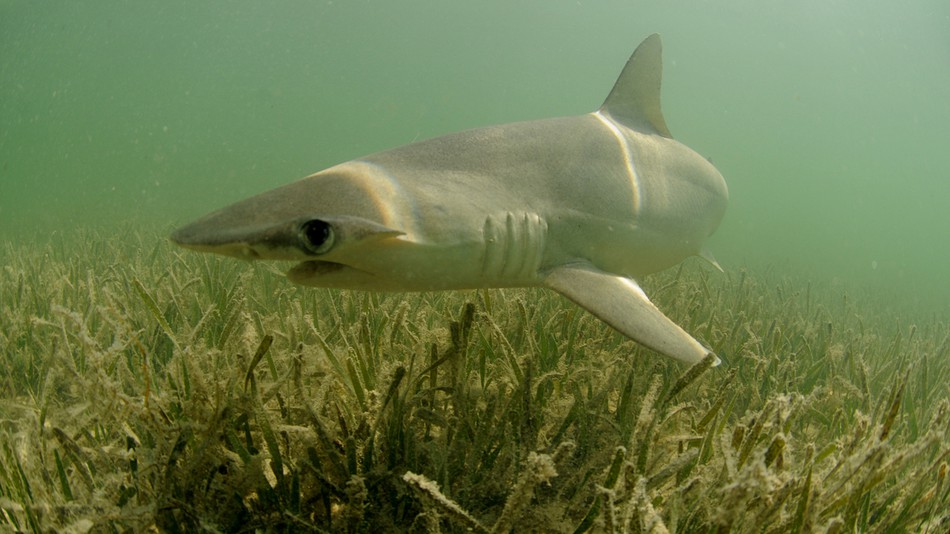 It’s not exactly as vegetarian as Finding Nemo‘s Bruce, but this grass-eating shark could come close to taking the “fish are friends, not food” pledge.

In a new study published by researchers at the University of California-Irvine and Florida International University, the bonnethead shark, which dwells in seagrass meadows off the Atlantic and Gulf of Mexico coasts, was found to be not solely carnivorous, as previously thought — it’s been sighted having a good nom on that seagrass on multiple occasions.

Although co-authors Samantha Leigh, Yannis Papastamatiou, and Donovan German presented their findings on the shark’s unusual seagrass-eating habits at the Society for Integrative and Comparative Biology’s annual meeting in January, the newly published study states that this is the “first species of shark ever to be shown to have an omnivorous digestive strategy,” the authors wrote.

Scientists have long known that bonnethead sharks have snacked on seagrass, they just weren’t quite sure whether it passed through their digestive system unabsorbed, gobbled up as a side effect of grazing for other fish. Now, knowing the sharks do absorb nutrients from the seagrass, the researchers have concluded that the sharks are, in fact, omnivorous.

The study, titled “Seagrass digestion by a notorious ‘carnivore,'” was published in August in the journal, Proceedings of the Royal Society B.

Through digestive system analysis (yeah, not pretty research), the sharks’ guts were found to contain up to 60 percent plant matter, with a few crustaceans and mollusks in the mix.

The researchers also found special enzymes that allow the shark to digest the seagrass effectively; according to the study, bonnethead sharks are actually better at digesting plant material than pandas. Take that, pandas.

So, why should you care about a grass-loving shark? According to the study, the effect of omnivores on the stability of an ecosystem has been debated by researchers, with these particular researchers suggesting that omnivorous predators in marine systems have the capacity to significantly impact the surrounding food chain.

In this case, the ecosystem in question is the seagrass meadows which the bonnetheads enjoy, alongside thousands of species of fish. The sheer numbers of the sharks (approximately 4.9 million individuals) means their impact is significant.

“Understanding how the consumption and digestion habits of bonnethead sharks impacts seagrass ecosystems is important as these omnivores may stabilize food web dynamics and even play a role in nutrient redistribution and transport,” the study reads.

“This is critical to effectively formulating conservation efforts.”

The full impact is still yet to be analyzed, but this research is a good start. Plus, I bet you’re looking at sharks differently now, not as mindless, meat-eating machines.