Great hammerhead (Sphyrna mokarran) is the largest representative of hammerhead sharks. This species of sharks live mainly in the warm waters of the tropics and inhabits areas around the coast. Their habitat is both continental and insular shelves, also these sharks are often found near coral reefs. 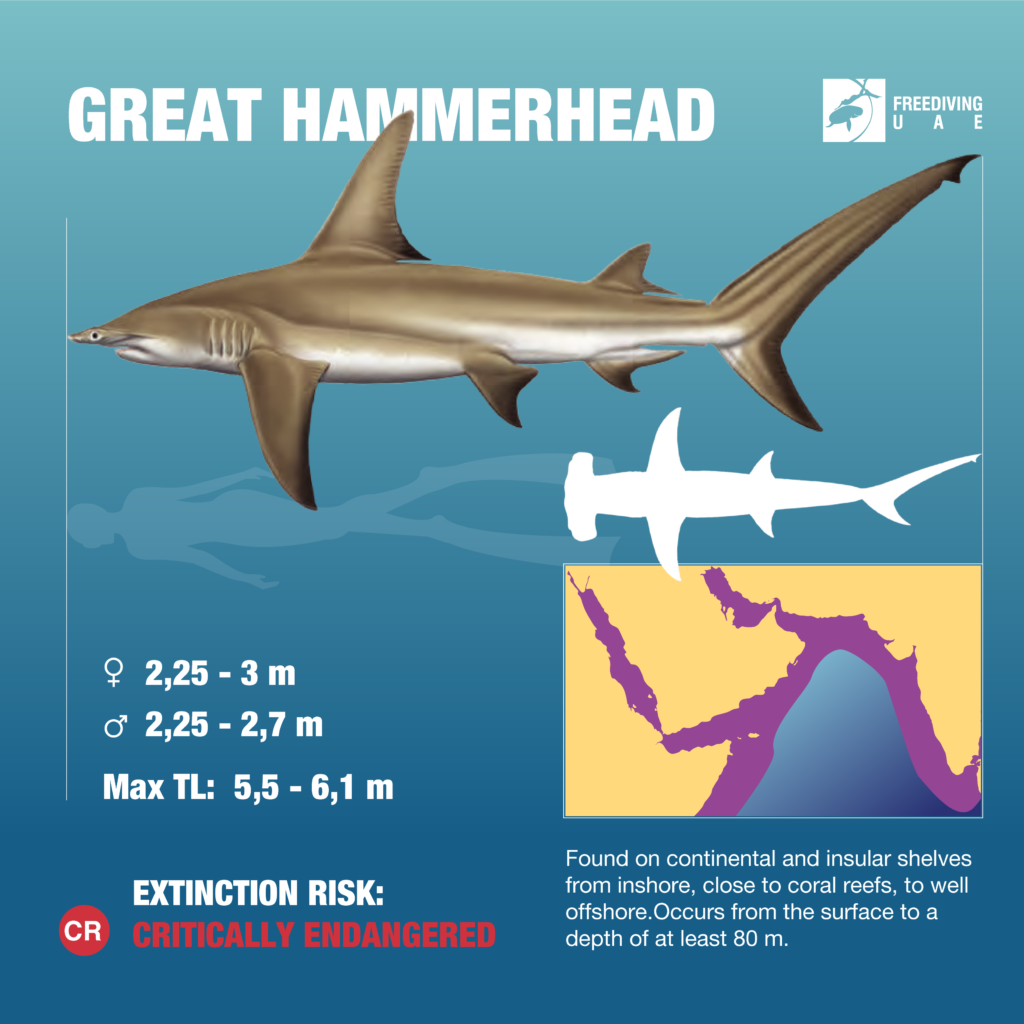 Great hammerhead sharks can most often be observed at a depth of approximately 80 meters although occasionally they are found much deeper, at a depth of up to 300 meters. The largest recorded specimen of these sharks was 6,1 meters long. And on average, males reach a length of 3 meters, females of 2,7 meters. And the heaviest specimen that was officially registered was a female shark weighing 450 kg.

The Great Hammerhead shark most often hunts alone. Their diet is quite diverse and even includes some types of small sharks as well as sharks of their own species. And its basis is made up of stingrays, fish, squid, crabs, lobsters, and octopuses.

Sharks got their name because of the literal external similarity of their head with a hammer. Their wide head with wide-set eyes is characterized by cephalofoil, an elongated front end, with an almost straight edge. This unusual structure helps sharks to make quick turns in the depths when detecting prey. Also, such a form of the head, together with the presence of electric sensors, allows sharks to hunt their favorite delicacy – rays as efficiently as possible. The first dorsal fin of the great hammerhead shark is distinguished by its height and is immediately recognized by a curved line. Adults and young individuals almost do not differ in appearance, except in size, but young sharks sometimes have dark marks on the tips of the fins.

Divers can sometimes observe great hammerhead sharks when diving. They may even swim towards people and show some curiosity. Cases of attacks on humans are extremely rare and, in general, such sharks are considered quite safe. But it is worth remembering that great hammerhead sharks are dangerous predators and can potentially be dangerous even for humans, so you need to be careful.

This species of shark belongs to the endangered. They are supplied on an industrial scale due to the large size of the fins, for which there is a huge demand, mainly in Asian countries, where their fins are used in cooking.