The dumbo octopus is a pelagic umbrella octopus belonging to the Grimpoteuthis family. They were given the name “dumbo” because they resembled Dumbo, the title character from Disney’s 1941 film, who has a prominent ear-like fin that stretches from the mantle above each eye. There are thirteen species in the genus. The average life span of various Grimpoteuthis species is 3 to 5 years.

Dumbo octopus is a deep-sea species that lives at extreme depths of 9,800 to 13,000 feet (3000 to 4000 m) on the ocean’s surface. These species can be found off the coasts of Oregon, Martha’s Vineyard, the Azores, New Zealand, Australia, California, the Gulf of Mexico, Papua New Guinea, and the Philippines, specimens have been discovered. Dumbo octopuses are the deepest living octopuses ever discovered. 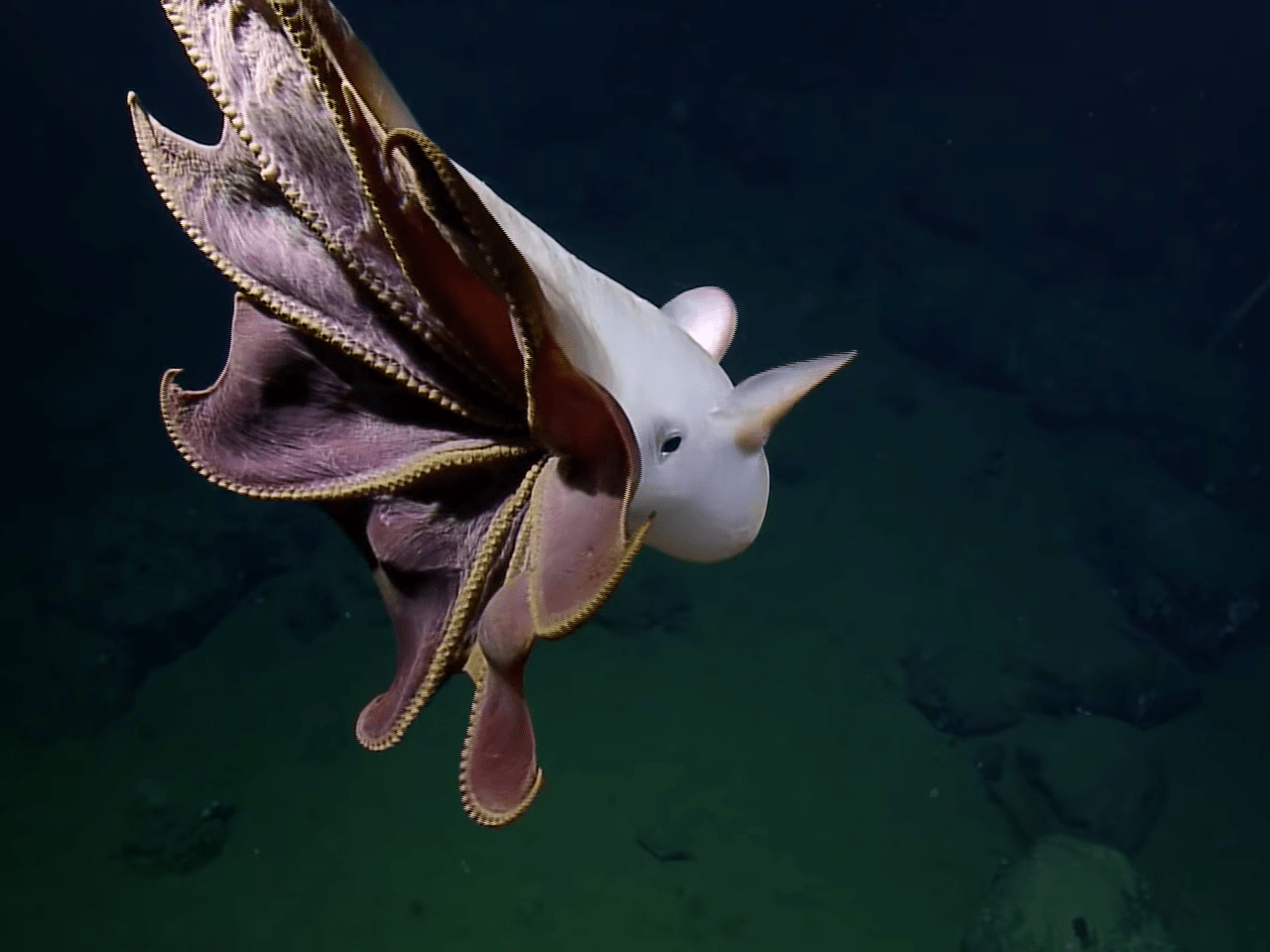 A dumbo octopus’ body is semi-translucent, with a shape-giving internal “U” or “V” cartilaginous shell or mantle. Some Dumbos are tiny, squat, and yellow, while others resemble a sea jelly and have one giant brown walking shoe. The majority of species have a length of 20-30 cm (7.9-12 in). With a pair of fins on their mantle—hence their name—and webbing between their bodies, the largest Dumbo octopus measured 1.8 meters (6 feet 32 inches) in length and weighed 5.9 kilograms (13 lbs.). Dumbo octopus does not have an ink sac unlike other octopuses because it rarely encounters predators in the deep sea.

Grimpoteuthis swim mostly beyond the ocean surface, searching for food such as snails, worms, and other species. Dumbo octopuses fixate on prey and consume it in its entirety. Copepods, isopods, bristle worms, and amphipods make up their diet. Most of the food they eat is located in the area of ocean vent habitats or floating in the current.

These species appear to have adapted to the deep ocean’s extreme pressure and cold temperatures by foregoing propulsion and rising mantle fins. Since their reproductive cycle tends to be occurring, they seem to be ahead of other shallow-water octopus’ species.

On the other hand, the population of dumbo octopuses are incompletely defined as there have not been further studies about it.