The pineapple fish is a bizarre specie yet can easily recognize by its yellow scales that are defined with black lines forming a knit-like pattern, resembling to the pineapple fruit. These sturdy scales are used as an armor to help them protect from predators like reef sharks and octopuses.

What makes it more attractive? In addition to its unusual body shape and markings, they have small organ found on both side of the lower jaw that houses symbiotic colonies of the luminescent bacteria, Vibrio fischeri. It produces a green glow and changes to red as they mature. They use this light to find the best mates in the dark and to attract curios prey. 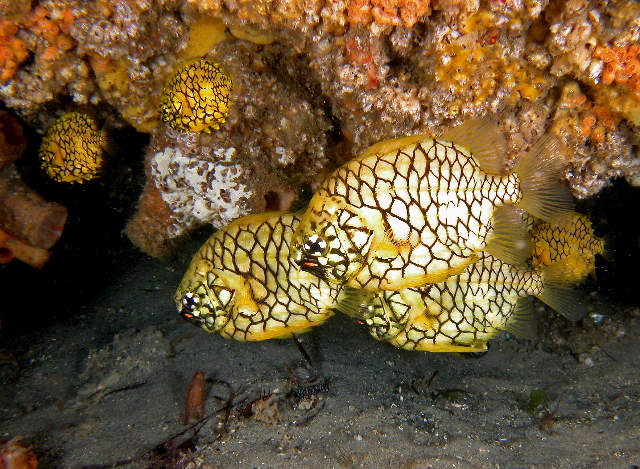 The scientific name for the specie is Cleidopus gloriamaris from Latin gloria and maris meaning “glory of the sea”. They are native to coastal waters off Queensland, New South Wales, and Western Australia at depths of 6 to 20 meters. They can grow up to a maximum length of about 25 cm (10 in.) and weight up to 2.3 kg (5 lbs.). They often remain hidden in rocks and caves during daytime and hunts prey mainly crustaceans during nighttime. They are weak swimmer and very territorial, they can stay and keep one specific ledge up to seven years.