The Clown triggerfish is considered the most beautiful of the Balistidae family, because of its distinctive pattern. It is also one of the most aggressive specie of the triggerfish.

The clown triggerfish is widely distributed throughout the tropical and subtropical waters of the Indian and Pacific oceans. They can be usually found on lagoon patch reefs and rocky areas at depths that can reach 75 meters.

It is quite obvious where the specie gets its name; the patterns, incredible mixture of colors, and lines that it makes look like wearing a makeup. But you might be wondering where the triggerfish came from, it comes from the locking feature of the dorsal fin that all triggerfishes possess. The first dorsal-fin spine is huge and strong that gives them protection from predation. When it is holding upright, it is locked in place by the second spine. The first spine can only be lowered after the second is pulled back, like a trigger. 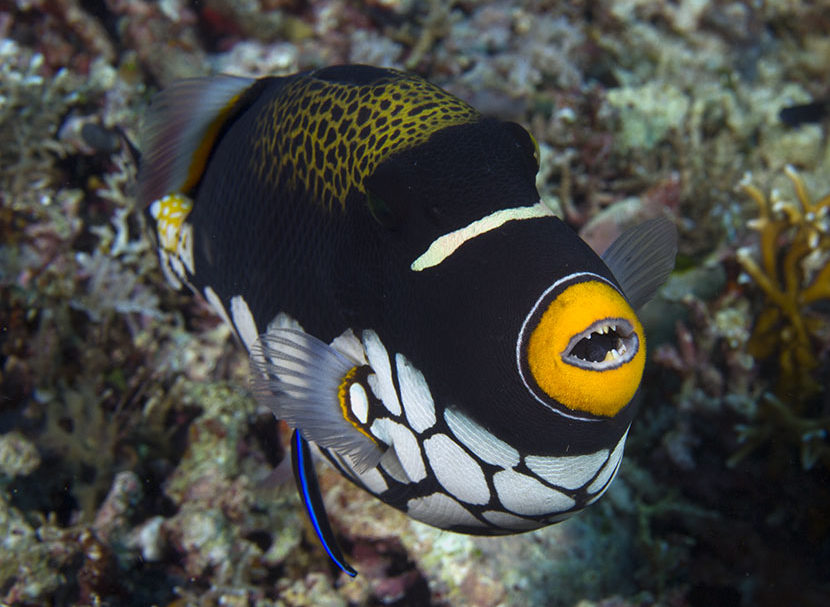 They also have a very strong set of teeth and jaws great way to consume their preys like sea urchins, oysters, lobster, crabs, and other shelled invertebrates.

When it comes on mating season, Clown triggerfish are territorial. Males are the first to appear at breeding areas, where they set up and defend it. Once females arrive, the males court them, and the females decide with which males they will mate. After a female chooses a mate, she lays her eggs in his territory, and he immediately fertilizes them. Together, they guard the nest until the eggs hatch.

Another interesting fact about Clown triggerfish is that they are related to puffer fish, all these families have extremely hard skin in common.