The bull shark (Carcharinus leucas) or “Zambezi shark” and “Lake Nicaragua shark” are all the names for this requiem shark. It can be found in both tropical and subtropical waters. These sharks are known for living near reefs, but they have a huge population over warm areas of oceans, rivers and lakes. This means they can live in both salt and freshwater systems. Despite their ability to survive in freshwater habitats they are not considered true freshwater sharks. 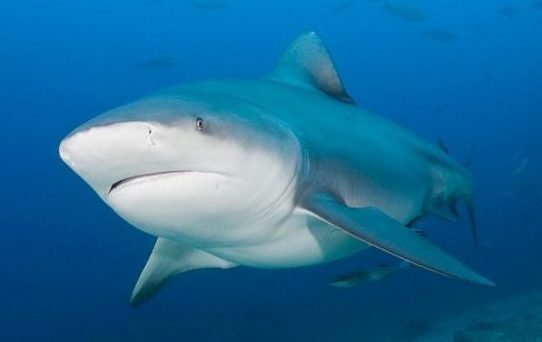 This shark is stout and massive with a short, broad and blunt snout, small eyes and triangular saw-edged upper teeth. It is wider and heavier than other requiem sharks. In color appearance they are grey on top and white below. Females are larger than males and adult ones in average are 2.4 m and weigh around 130 kg. However, sometimes they can be almost thrice as big. Until recently it was believed that the record of 315 kg was the maximum for these species but in the last 10 years members of different associations claimed to have caught ones up to 350 kg and 3.5 m.

Bull sharks are very protective of their territory they are probably one of the most dangerous species to humans and vice versa. While the attacks in fresh waters are extremely rare, sea and ocean accidents have often been reported. This may or not may have been an inspiration for Peter Benchley’s novel “Jaws”.